Consider This “Back Door” Way to Profit From the 5G Revolution

Today, 5G (fifth-generation) technology is set for its rollout phase.

Or so we’re being told…

Apple and Samsung timed their new phone launches around it. Verizon, AT&T, and other telecoms have invested about $275 billion to install thousands of antennas to make 5G happen.

And millions of Americans plan to upgrade their phone to tap into this exciting new technology.

If you’re one of them, I’ve got some bad news.

5G has an epic problem.

It just doesn’t work as promised.

There’s a fatal flaw preventing 5G from rolling out across the country.

If it isn’t fixed, it could take years for American cities to see true 5G speeds.

But there’s a lot more at stake than your phone’s download speeds.

All depend on seamless 5G connectivity… at lightning speed, in real time.

But before 5G can transform our lives…

That one major flaw needs to get fixed.

Today, I’ll explain the big obstacle holding 5G back… and the groundbreaking solution that some companies are using.

But first, let me get you up to speed on the 5G revolution.

5G stands for “fifth generation.” Your smartphone likely shows a 4G icon on its screen.

Until recently, 4G was a freeway compared to the three generations that preceded it. 5G will leave it in the dust.

The next generation of service will increase download speeds by 10 to 100 times what 4G offers today. Your 4G phone may display a spinning icon while you wait for YouTube to show you a video. Your 5G phone could download a full-length, high-definition version of the movie Titanic in seconds.

5G signals are not the same as 4G, because of something called spectrum.

The spectrum is the length of the wave where information travels. The longer the wave, the lower its power.

Think of CB radios. They operate on a very low spectrum, less than one gigahertz (GHz). The signal sent and received from a CB is effective but crude. There’s not much power behind it.

5G needs a spectrum as high as 39 GHz on average.

The graphic below shows 4G and needed 5G mobile spectrums. 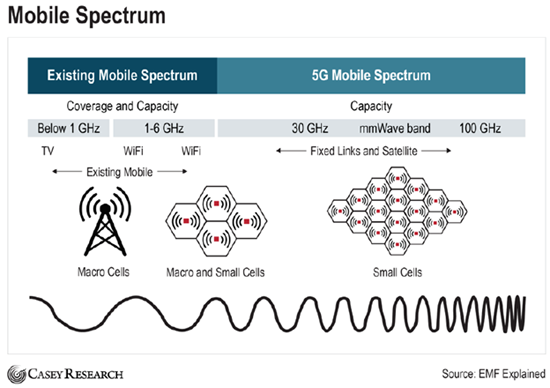 Simply put, 5G connectivity is not possible on the existing cellular network. The two services operate on different spectrums. That means delivery of 5G service can’t happen on the existing 4G network.

That means a radical increase in connection speed can’t happen without a massive investment.

China controls about 36% of essential 5G patents by our count. That’s why President Trump recently said, “The race to 5G is on, and America must win.”

But like I said before, there’s a catch. The service barely works…

By our count, more than 30 major cities, including Chicago, Denver, and Atlanta, have some level of 5G coverage today. Take Chicago, for example. If you’re standing next to the famous Bean in Millennium Park, you’re connected to 5G. But walk a few blocks west, and you’re back on 4G… the same service you currently have.

Drive through any major city today, and you’ll see small, white antennas mounted on the sides of buildings. These are “cells.” They provide increased 4G cellular network penetration. That’s what makes your existing smartphone work so well compared to the one you had in 2005.

Mounting these cells on buildings, towers, and other tall structures helped cover cities with 4G networks.

You can now walk into a Verizon store, buy a 5G-enabled phone, and get connected. 5G service means nearly instant download speeds and minuscule latency.

The problem is, you’ll drive across town and realize the service doesn’t work. You’ll be back on 4G, wondering why you spent $1,300 on a 5G-enabled phone.

As the major U.S. phone carriers deploy upwards of $275 billion bolting 5G antennas onto anything they can find, the cell service still won’t work as well as what you have today.

Like I explained in the box above, the 5G signal operates on a higher spectrum than its predecessor. As you move up the spectrum scale, more data travels at faster speeds. That’s good. The problem is, the signal is not as powerful.

A low-band spectrum CB radio signal isn’t very complex, but it travels far and wide. Key the mic on channel 19, and your buddy a mile away will probably be able to hear what you have to say.

However, the higher bands of spectrum needed for 5G can’t cover as much ground.

That means 5G service is a double-edged sword. You can download the movie Titanic almost instantly, but you’ll need to have a mostly clear line of sight to the new 5G tower.

That means more and more 5G towers need to be built to provide quality 5G coverage.

But this solution won’t work for everybody… especially customers in rural areas, who don’t stand a chance waiting for traditional cell towers to pop up.

As of last year, the United Nations reported half the world still had no reliable access to internet service. But that won’t last long. Legendary futurist Dr. Peter Diamandis says every person on Earth will have high-speed internet service by 2024.

Satellites can help facilitate the 5G network. This is how the Amazon rainforest gets cell coverage. Same for the Wi-Fi you’re now using on plane flights. Soon, they will carry 5G signals to areas that can’t afford the cost of a huge 5G infrastructure rollout.

There are upwards of 5,000 satellites circling the Earth. About a third of those are active.

That’s a drop in the bucket compared to what’s on the horizon.

SpaceX needs 400 LEO satellites for its network to begin functioning. It has approval to launch 12,000. Amazon’s Project Kuiper aims for a network of 3,200 LEO satellites.

But the current amount of satellites more than meets the world’s military, commercial, and civil demand. Some analysts even argue the skies have more satellite capacity than the world needs.

Regardless, the satellite network already in place makes up the core satellite system. But there’s an opportunity in the fringe network.

Fringe satellite capacity refers to the connections offered to users away from the core demands of military and industrial users. The governments and militaries of the world paid huge development costs to get those networks online. Now the technology exists, and it can be delivered downstream to customers who couldn’t previously afford it.

The official name for this type of service is “cellular backhaul.” In layman’s terms, it’s selling surplus satellite capacity to fringe network users.

For instance, this can take the form of in-flight internet connections on U.S. airlines or traditional communication services to aircraft.

Industry analysts expect the backhaul market to grow at 14.9% per year between now and 2023. And plenty of companies will benefit from this trend.

But not every company in the space is worth investing in.

Remember, these satellites need communications equipment in order to function as a network accessible to devices on Earth.

One of those pieces of equipment will be semiconductors. These are tiny computer chips found in just about every device that will connect to 5G. And thanks to the 5G rollout, demand for these chips is about to skyrocket.

That’s why I suggest you look into the VanEck Vectors Semiconductor ETF (SMH) if you want some easy, indirect exposure. It holds several companies tied to semiconductors, so it should rise as the 5G trend gains momentum.

Just remember to position size appropriately. And never bet more than you can afford to lose.

Thanks to COVID-19, Cannabis Stocks Are Booming

Profits From These Biotech Stocks Will Be Breathtaking