A Picks-and-Shovels Play for the Global 5G Trend

During the French Revolution, France was looking for a better way to communicate. Forces from Britain, Prussia, Austria, and Spain threatened to spoil the party.

Claude’s brother, a member of the French Legislative Assembly, suggested they turn to Claude’s new invention. So Claude and his four unemployed brothers got to work.

What they built was the first national communications network in world history. In fact, it’s probably the first wireless network ever created.

Télégraphe Chappe was a system of relay towers placed about 10 to 20 miles apart. Each tower had two arms. The arms could rotate in seven different positions, with the crossarm having four distinct positions.

Together, they had 196 combinations representing about 8,500 distinct words. (You can see a demonstration of how this worked here.)

By 1792, there were 15 stations between Paris and Lille… That helped France in its war with Austria.

One of the most famous military commanders in history used it to great effect: Napoleon. In fact, some historians call télégraphe Chappe Napoleon’s secret weapon.

In war, communication can be the key to winning or losing. The faster you relay messages, the more likely you are to win.

So instead of waiting days to relay news from the front lines and back, Napoleon only had to wait hours.

It was revolutionary. With the system already in place, Napoleon conquered Europe.

At its height, the network reached over 500 stations spanning more than 3,000 miles.

Our Old Network Needs a Face-lift

Today, we don’t think much about the way we communicate. It is second nature. We can talk to family and friends anywhere in the world with almost no delay. Better yet, we can see them in near real-time through video chat.

It’s a technological marvel. And it’s all due to the constantly evolving communications network we rely on every day.

The problem is, every so often the network needs a revolution of its own. The system can only handle so much before it reaches its limit. Right now, we’re nearing that limit.

The rate at which we use mobile data is exploding. As more and more people demand ever increasing amounts of data, our old network can’t handle the strain. It needs an expansion just like Napoleon did to help him conquer Europe.

That’s why the 5G buildout is such a big deal.

Building out a new infrastructure is costly. Billions of dollars are up for grabs. Speculating in the small companies that supply that buildout can mint fortunes.

Because without the right equipment, we’ll never be able to reach the network’s potential.

And to reach the network’s potential… we need hundreds of thousands of more cell sites.

Data on the Rise

According to Ericsson Mobile Data Traffic Outlook, people in North America will consume 45 gigabytes of data per month on each smartphone by 2025. That’s a 31% compound rate.

The reason is simple. In just a few years, the number of 5G subscribers exploded from a few million to over 400 million today. By 2026, that number should be about 3.4 billion.

If you’ve never seen a small cell, you’re not alone. They’re typically nested in objects hiding in plain sight. And the great thing is, you can put them almost anywhere. That includes on light poles, rooftops, or other areas that you can easily access.

I saw them firsthand while on the streets of Denver. The fact is, we need the 5G network to help give rise not just to our thirst for data, but also to new technologies like self-driving cars, remote surgeries, and more. That’s the real power of the 5G network, and these technologies can’t function properly on today’s 4G network.

Every one of these technologies needs data to function. To get that data, you need a near seamless wireless connection.

And to do that, you need… coverage. More coverage means our current wireless network must become denser.

The traditional way to build a network is by installing communications towers much like the one pictured below.

They’re hard to miss, especially if you live in a suburban area. The problem is, they take up a ton of space. Space we just don’t have.

But small – or micro – cells like the one in Denver are different. They don’t need a communications tower to function.

Major tower operator Crown Castle International (CCI) knows this is a big opportunity. That’s why CCI is the number one operator of small cells in the U.S. today. The company knows a denser network is a better network. 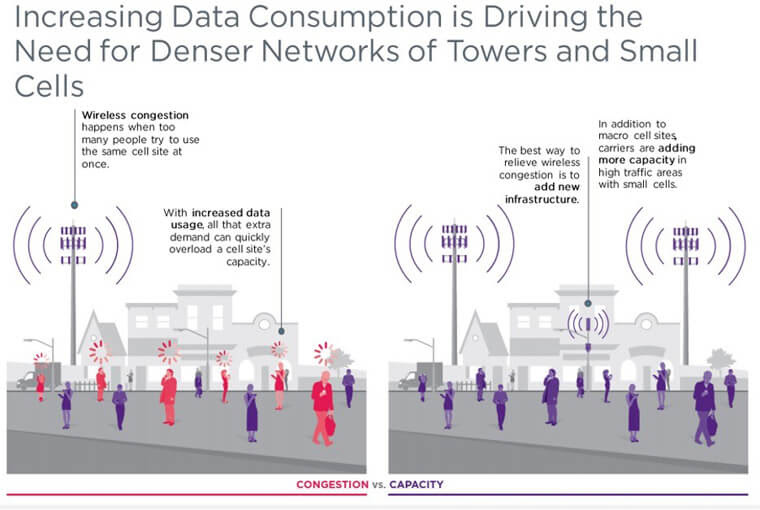 The denser the network, the better the signal.

It’s what will keep our thirst for data quenched. No more lost connection signals or fuzzy pictures during your latest Netflix binge-watch. No more dropped video calls with grandma.

But it’s not just major companies seeing 5G as a way forward. The U.S. government is making it a national priority. Prior to the recent $1.2 trillion infrastructure bill, the government committed almost $15 billion to help more people get better and faster connectivity.

However, with the infrastructure bill signed into law, another $65 billion is up for grabs to help accelerate more access.

Where Will All This Money Go?

There’s a lot at stake with the 5G network. And if you have a 5G phone… you know that coverage isn’t very good at the moment. (I recently filmed a briefing on how 5G isn’t performing as it should, and how you can profit from the flaw in the network. Check it out here.)

But with the influx of money… and the growing need for data, that will keep changing.

And it’ll make investors in the right companies a lot of money.

But not every company in this space is worth investing in.

Investors should focus on the “picks-and-shovels” of the 5G revolution. That means companies that build the parts for the towers that make the 5G network functional.

One of them is Crown Castle International (CCI). In the past two years, its share price has risen over 46% as it has helped build out the 5G network. Recently, along with the broader market, shares have pulled back from their highs… But I don’t expect that to continue.

Now’s a good time to build a position in this leading picks-and-shovels play in the 5G trend.

Three Simple Ways Anyone Can Get in on Pre-IPO Deals