The Best Investment of the Last Decade… and the Next

Many people don’t know this… but bitcoin is the best-performing asset class in 8 out of the past 10 years.

Since its March lows, bitcoin has skyrocketed 366%. And last month, it recently surpassed its all-time high of $20,000 before briefly pulling back.

Despite all the naysayers, bitcoin will close out 2020 as the best-performing asset in the world again. It bears repeating: This will be the eighth time the king of cryptocurrencies will wear the crown.

But with bitcoin in another major bull run, many of you may be thinking you’ve missed the boat. You may be saying to yourself, “There’s no way bitcoin can continue its streak of dominance for another decade.”

If you believe that, I want you to reconsider your point of view. My research suggests we are still in the early innings of bitcoin’s rise to dominance. That’s why I predict it will be the No. 1 investment of the entire decade.

And you still have a chance to ride its coattails to life-changing gains… But that window of opportunity is fast closing.

We’re Still in the Early Innings

My historical research of technology adoption tells me we’re now at a critical juncture for bitcoin, other cryptos, and the blockchain technology that underpins them.

Today, only about 15% of the U.S. population owns bitcoin.

This principle has been consistent across various trends and time periods – from the microwave to cell phones to the internet.

You can visualize it as an S-shaped curve, shown below… 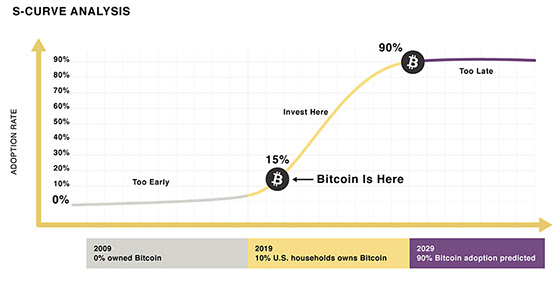 Source: Off the Chain Capital

You can see what I’m talking about in this second chart, which shows the S-curve for various other technologies…

New technologies, such as bitcoin, can be valued by the “network effect.” What this means is that adding new users to a network results in its exponential gains in value.

Think about computers. Apple invented the personal computer (PC) in 1976. In 1980, about one-tenth of 1% of households owned a PC.

Bitcoin is on the same path…

Back in 2016, few believed bitcoin was a viable long-term investment. It was called a fad and a fraud, and some even dismissed it as a currency for criminals. But I knew they were off the mark.

At that same time, I told readers to get in early… that the naysayers were wrong and bitcoin adoption would explode. And I was right.

Today, we’re about to see it go even higher…

Still the No. 1 Investment of the Decade

If cryptos and blockchain follow the same pattern – and we believe they will – you could see an exponential increase in adoption rates over the next decade.

Last month, payments processing giant PayPal launched its new service allowing its 346 million customers to buy, hold, and sell crypto directly from their PayPal accounts. Other companies, like Square and Visa, are doing the same.

So if bitcoin’s growth trajectory is akin to that of the internet, cell phone, and microwave, then we’re now entering the final innings of explosive mass adoption.

That means the gains we’ve seen thus far are only the beginning.

If anything, past trends suggest the biggest gains are typically made right after the early adopter phase ends… which is exactly where we are today.

Friends, when I first started talking about blockchain in 2016, people called me crazy.

But that’s because they didn’t understand just how groundbreaking this technology was going to be.

You see, blockchain is more than just the underlying system behind crypto. It’s going to revolutionize how we exchange value, store information, and manage property rights. Mainstream companies and institutions are finally starting to wake up to its potential.

That’s why the World Economic Forum predicts blockchain will store 10% of the world’s GDP by 2027 – about $8.6 trillion.

I believe bitcoin and its underlying blockchain tech will have a greater impact on everyday life than the internet does today. It’ll touch nearly everything we do. And that’s why it’s my No. 1 Investment of the Decade.

So if you haven’t bought into this trend yet, it’s not too late. But don’t wait. Add some exposure right away.

Let the Game Come to You!

Top Market-Timer Calls Next Top AND Bottom for Stocks

How to Avoid the Worst Mistake in Options Trading